Samuel Morse was a painter and more famously as the inventor of the telegraph. 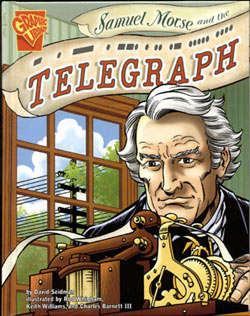 Samuel Finley Breese Morse was an artist and is more famous as the inventor of the telegraph. He was born on April 27, 1791 and died on April 2nd 1872. He spent most of his life as a painter and studied art in London with Washington Allston. He won many awards for his art and was also famous for his painting of the House of Representative. Samuel married a woman named Lucretia Walker in 1818 but he had to spend most of his time away from his family when he was drawing a portrait of Marquis De Lafayette  He later learned that his wife died shortly after she gave birth to her 4th child. Due to depression, he left his children to one of his brothers and began to have high hopes for his paintings in New York but unfortunately it did not attract many public attention and were not very successful.

This made Samuel frustrated and this lead to his interest of trying to create and invention.  He teamed with his brother and created a few inventions such as a flexible-piston pump on 1817 and a marble-cutting machine on 1822. But his inspiration of electrical machines came after talking with Charles Thomas Jackson on a trip to europe. He was later able to have enough money to make a small prototype of the telegraph. It was a pair of wires that was connected to a lever, electromagnet, battery, and a pencil that can draw waves on a paper. When the lever was switched i would make the pencil draw waves on a moving roll of paper. The first telegraph was only capable of sending messages a few feet away, but after wrapping a wire around the electromagnet many times with a stronger battery, it was able to send electrical pulses for more than 10 miles. Alfred Vail, a student from a university helped Morse with Joseph Henry and  Leonard D. Gale. Vail replaced the pencil with ink that would make dashes and dots. They would all receive financial interest from the invention.


The government was interested and passed a bill that gave Morse and his team $30,000 to have a telegraph in the country. They hooked up a telegraph wire from Baltimore to Washington. That was the first time the telegraph sent a message for governmental purpose and Morse replied the famous quote, "What has God wrought" from the machine.

The Morse Electromagnet Telegraph Company then allowed the use of this invention in certain parts of the world. He built a house near Poughkeepsie in 1847 and married his second cousin, Sarah Griswold. Samuel had four more children and won many awards and money for his telegraph.